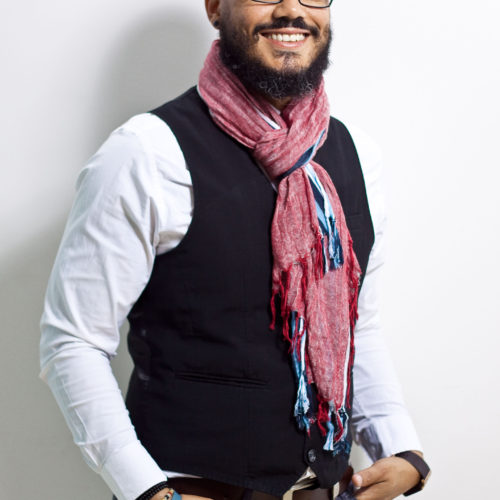 Of Ghanaian/German heritage and raised in Lesotho, Kojo is an entrepreneur, writer, facilitator, content architect, former magazine editor and speaker, who has worked and run businesses in a range of sectors including Retail, Management Consulting, Publishing, Events, IT and Media (Television & Print). He has a B.Commerce (with majors in Economics, Marketing and Business Administration) and he speaks on various topics such as Understanding Media/Content in a Digital World, Re-defining Success, Finding Purpose, Identity and Fatherhood.

He was poet laureate for Gordon Institute of Business Science and has performed extensively over the years having been a part of the poetry movement, particularly in Johannesburg, in the late 90s/early 00s.
This includes for corporate, arts and other events as well writing commissioned pieces for brands, campaigns and the like. He published two collections of poetry in 2005, has been published in poetry collections in the US, Brazil and Europe, has facilitated poetry workshops and ran various poetry properties.

He has facilitated, hosted and MCed a range of events, conferences, workshops and seminars across sectors, including for Glenfiddich, Allan Gray, Old Mutual, Bisquit, Standard Bank, Microsoft and Club Med amongst others, the highlight of which was live conversations he had with Russell Simmons at the Destiny Forum, Jabu Mabuza, Stafford Masie, Mokena Makeka and interviewing actor and activist, Idris Elba, former Oudemeester Global Ambassador.

He was founding editor of Blaque Magazine, has written for a range of publications including as a columnist (2009 – 2011) for City Press’ lifestyle supplement, 7, is an avid blogger and a social media practitioner. He was part of the team that created and produced Afro Cafe (a music show), Emcee Africa (a pan-African reality music show), Making Moves (an entrepreneurial show), Zooming In On Men (a men’s lifestyle show) and Zwahashu (a lifestyle show). He has been a judge for the Business Arts South Africa (BASA) Awards since 2010, the MTN Business App of the Year Awards, the Apple In Education Awards and Miss South Africa 2014, 2015 and 2016. He was also a judge for the reality television show, She’s The One, Seasons One (SABC3) and Season Two (ETV).

He was Editor of the men’s business and lifestyle magazine, Destiny Man, for four years from 2010 and is editor of Afropolitan, which covers lifestyle, business, thought provoking articles on current affairs and luxury.

He is also a founder of Project Fable, a content design and insights consulting company where he consults on strategy, branding and marketing using content and media to amplify and build communities. And he consults for and with Basiq Blaque, an experiential events and project management company established in early 2006 to add value to the development of African society into the future through the creation of opportunities for dialogue and interaction across society.

He continues to produce content and write for various publications and platforms, including his own.

Kojo is host of the Kaya FM Radio Show, Life With Kojo Baffoe, which is on air every Thursday from 20h00 to 21h00. The show’s focus and philosophy is driven by the reality that the world is full of blurry grey areas where things are not always what they seem. Life is not clear cut. Life cannot be neatly packaged and squeezed into a box. Life is cacophony. It is contradictory, paradoxical and, sometimes, downright confusing. And that’s what makes it beautiful – the questions, the journey to understanding and finding answers that make sense to us.

All Sessions by Kojo Baffoe [Moderator]